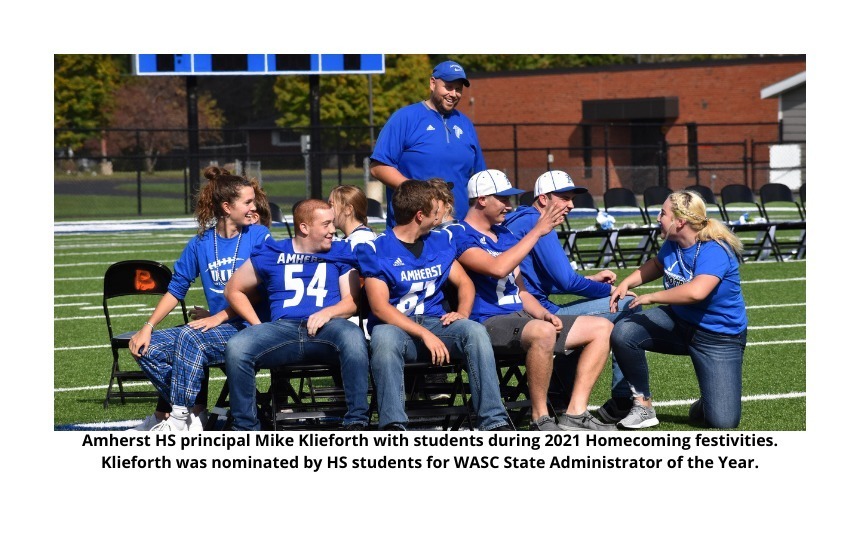 “Any recognition is greatly appreciated, but receiving this award is extra special,” Klieforth says. “This is because it was student-driven. Students at our school took the initiative to put their thoughts on paper and nominate me for an award without my knowledge. That is what makes this award so special to me.”

According to WASC, typically students nominate their administrators; however, advisors and/or teachers can also nominate. The nomination form asks for a reason the candidate is being nominated, community involvement, as well as other activities/involvement that support the nomination. Here is an excerpt from the nomination form received by WASC from Amherst students:

“Mr. Klieforth has taken action to help better the lives of students at Amherst High School multiple times,” the letter said. “For example, when there was no coach for the freshmen boys’ basketball team, Mr. Klieforth stepped in and offered to be the coach. If he hadn’t offered to be the coach, the basketball team would not have been able to play. He tries to do the right thing for our school and he has genuine concern for all students. He continuously looks into each student's activities so he can have personal conversations with each student. For example, an exchange student switched houses in the middle of the school year, and within the week (Mr. Klieforth) was asking how the switch was going.”

The nomination went on to call attention to the fact that Klieforth volunteered as a bus driver during a period where the district was short on drivers as a result of COVID, and that he serves as a volunteer fireman for the Amherst Fire District. Additionally, Klieforth is Vice President of the Tomorrow River Business Association and is finishing up national accreditation for Emergency Medical Responder to help with the local EMS.

The WASC has been in existence since 1935. It was originally called the Wisconsin High School Student Council Association (WHSSCA). The name was changed to WASC in 1948. In 1973, the junior and middle school schools were added. Leadership camp was established in the 1960s and still exists today. The WASC is a state-wide organization of public, private, and parochial elementary, middle, junior, and senior high school student councils and/or student leadership groups dedicated to the continuation and expansion of leadership development and student responsibilities in Wisconsin. WASC is partnered with the Association of Wisconsin School Administrators (AWSA) and affiliated with the National Association of Secondary School Principals (NASSP/NASC).